Assign a Translation Memory to a Project

Translation Memories in your project

Open your project and scroll down to a section labeled Translation Memories. The assigned TMs are listed there, including the target languages and the TM's settings. 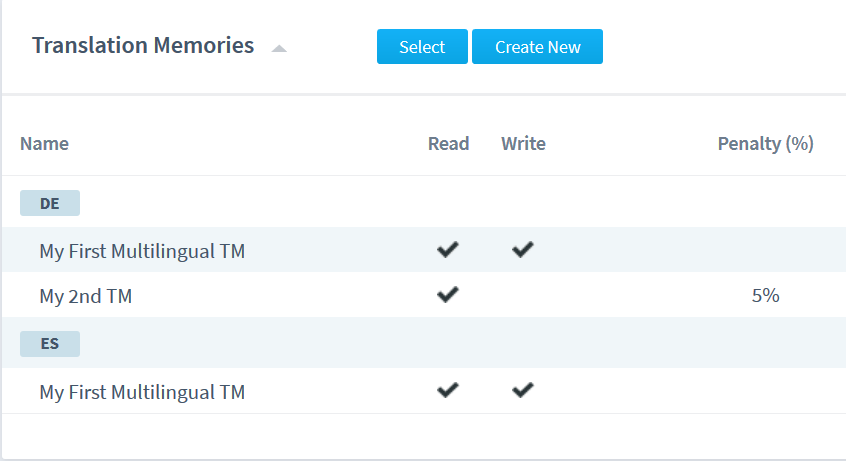 There are two options there:

Selecting the TMs for a Project

There are several different options for each TM that you can use: 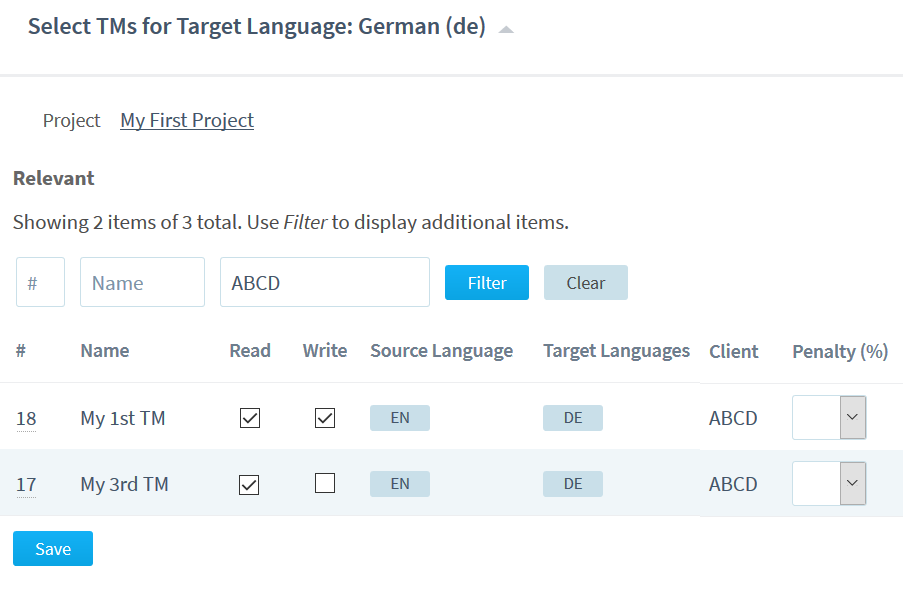 There are a few important things to note:

Memsource also allows you to add a TM to a project with the same language but a different locale.
Generally, all languages with the same prefix can be added (EN, EN_GB, EN_UK, etc.). For example, if you create a TM with German and English as your languages, you can assign TMs that use both DE and DE_CH as well as EN_GB and EN_US. (It also does not matter which is the source language and which is the target). However, keep in mind that all translation units will be stored as EN only with no distinction between US and GB. Therefore, using this TM for strictly GB or US projects might be inaccurate.

Note that for certain languages, the code has a different prefix. For example, Norwegian has the code "NO" and Norwegian (Bokmål) has code "nb-NO”—these two languages cannot be mixed.

When selecting TMs for projects with Workflow steps, you can decide whether the same translation memories should be selected for all of the project's Workflow steps or whether each Workflow step should have its own TM set up.

If you are using proofreading on a regular basis, we recommended that you do the following:

If you assign multiple TMs to a project but want to prefer matches from only one (or a few selected TMs), you can set a penalty for any of the selected TMs, as shown below. These settings will impact the pre-translation, analysis, and the matches offered to the Linguists in the Memsource Editor.

In addition to applying penalties to an entire TM, you can also apply a 1% penalty to 101% (in-context) matches within a TM. This option is useful, for example, if you would like a Linguist to decide which 101% match from different TMs should be used in a translation. The penalty will mean that none of the in-context matches are inserted automatically into the target segment if the text is pre-translated.

If you do decide to penalize 101% matches, the penalized matches will be displayed in a new order in the CAT Pane. That is, a 101% match penalized by 2% will become a 99% match. A little arrow indicating the penalization will be shown next to the percentage number.