Data can be imported into a Memsource translation memory. To do this, open the Translation Memories page, select your TM, and click on the Import button.

Once you click the Import button, you'll see a File field that you can use to drag and drop files to and a Browse button. You'll also see three checkboxes: Remove tags, Strict locale matching, and Ignore not confirmed segments. 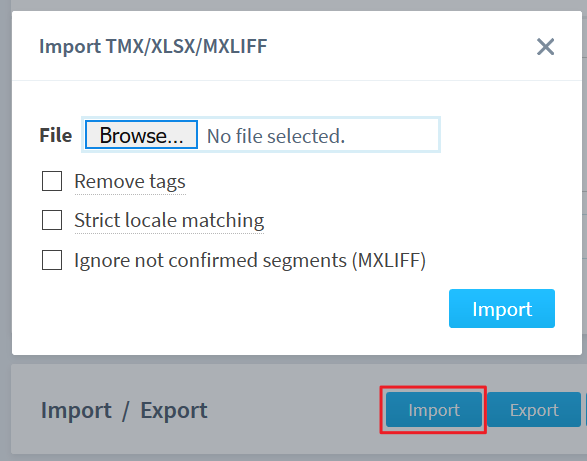 Remove tags will remove all of the tags that were imported from TMX files. However, the special Memsource tags ({1} or <2}) in XLSX and MXLIFF files will be preserved.

Strict locale matching will prevent the importing of a language if it has a different locale than the project. For instance, a file with an "EN_US" designation will not be imported into a TM with an "EN" designation.

Selecting Ignore not confirmed segments (MXLIFF) applies only to import of MXLIFF and it will ensure that segments that were not confirmed in the MXLIFF file will not be imported into the TM.

At times, you may receive an error during a TM import. By far, the most frequent reasons for import errors are non-corresponding languages, illegal characters, or other similar irregularities in the file which you attempted to import. There is also a limit to a size of the file (1GB). Please check your file to ensure the languages in your TM match with the languages in your project and that the formatting for each language is set up correctly.

In order to successfully use a TMX file, it has to match the source language of the translation memory and at least one of its target languages. When a TMX file includes multiple target languages, only those present in the translation memory will be imported. The TMX file version should be 1.4 or 1.4b, although Memsource should be able to import other versions as well.

Using a TMX that has been exported from SDL Trados is supported in Memsource, but only certain attributes will be imported into your Memsouce TM. Please also note that the following changes will occur:

A TMX created in Worldserver is also supported in Memsource with limited attributes. In addition, the following changes will occur:

Note: A segment's context in the WS TMX is coded and therefore can be deduced only to some extent.

MXLIFF files can be imported into the translation memory via the Import button as noted above. However, this import feature has been designed primarily for emergency situations. For example, when it is not possible to upload the MXLIFF back to the job directly via the Upload button in the project or via the Memsource Editor.

Excel files (XLS and XLSX) can be directly imported into the translation memory. Excel files should be formatted as lists of plain segments without tags and with the language code at the top of each column.

The duplicates within an XLSX file will be removed. Please note that segments translated in Memsource are saved to the TM with context. Identical segments will not be deduplicated unless they also have the same context.