A Project Manager or a Linguist can pre-translate a job automatically using the Pre-translate function in the Project settings.

The following submenus are available (depending on your Memsource Edition):

Pre-translate where Empty can be set on 4 different pages in Memsource and can later be used for automatic pre-translation when a job is created. With the exception of the fourth option, each section also includes special settings for auto-propagating repetitions. The four places it can be found are:

Repetitions (This feature is available only in Setup, in the Project's settings, and in Project Templates.)

Set segment status to confirmed for 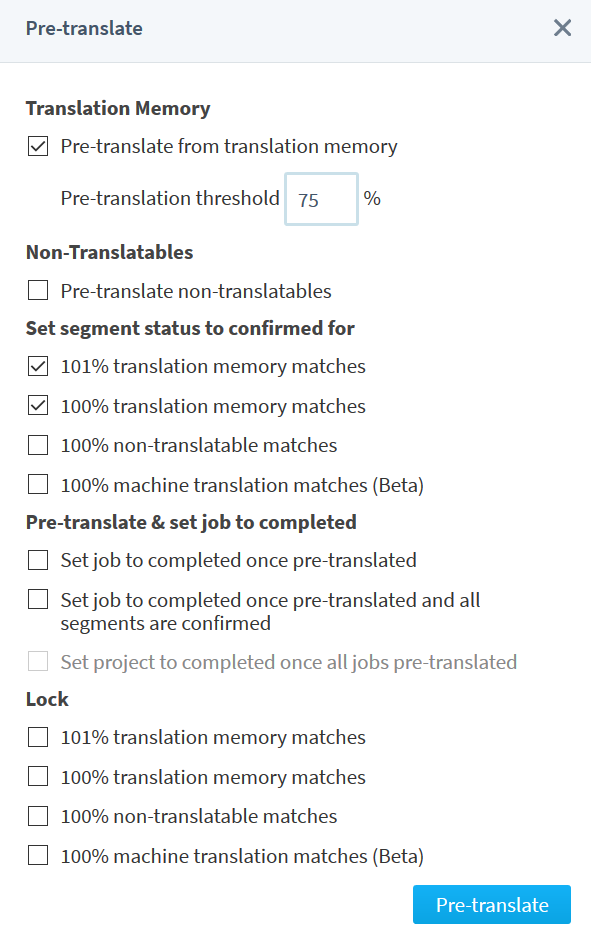 Set segment status to confirmed for:

Note: Locking segments during pre-translation can be only done from a PM's account.

In order to unlock segments, the Linguist needs to contact the Project Manager and ask to have the segments unlocked. It is possible that the segments are locked on purpose and should not be translated by the Linguist.

It may not be necessary or even advisable to always pre-translate files before translation. Normally, the Memsource Editor will take care of the pre-translation in a way that can be more efficient.

This feature makes it possible to pseudo-translate a file using the following options:

Pseudo-translate is available in the Team edition and higher.