The In-context Preview feature offers a real-time preview of original or translated text directly in the Memsource Editor and is available in all Memsource editions. 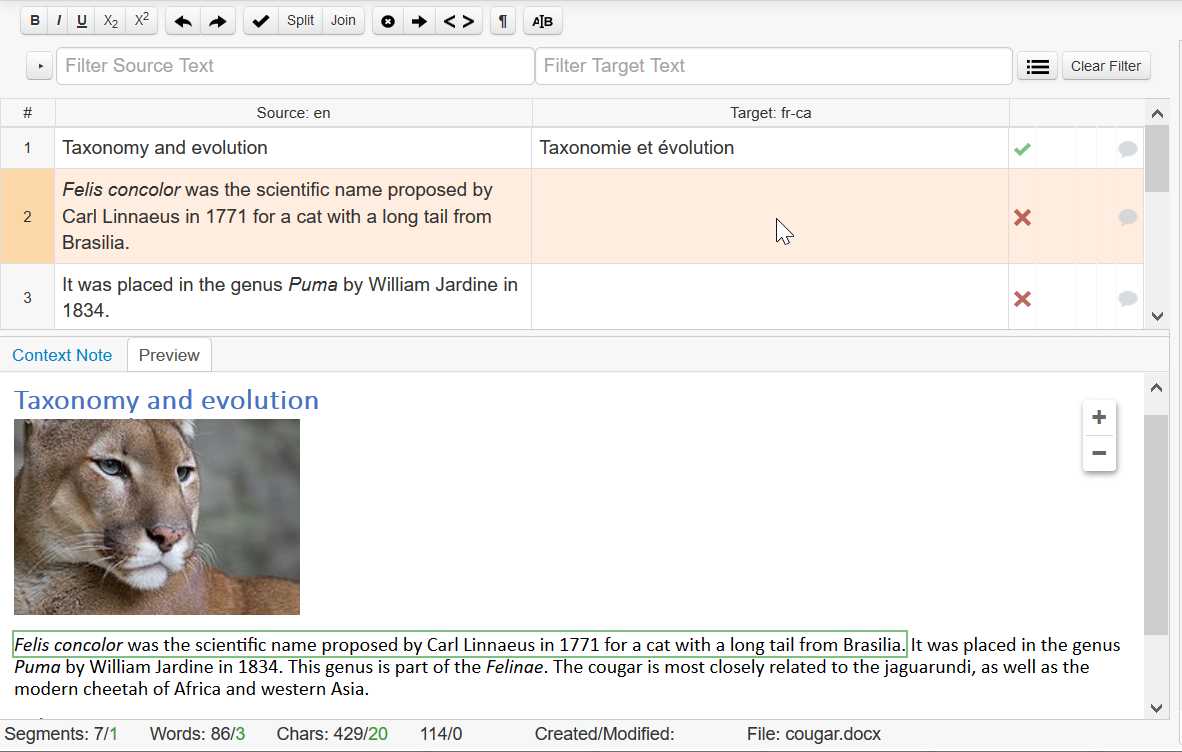 Please note that while tables, columns, various graphics, formatting, and fonts are supported, the feature is meant to provide context when translating, not a perfect representation of the original or completed document in all respects (i.e. there might be some visual differences).

If the preview can not be generated (the file type is not supported or the limits for the preview were exceeded), the following notification will appear: "In-context preview was not generated". If this happens, you can download a preview of the translated file by going to the Document menu and clicking Preview Translation.

The In-Context Preview can be found by clicking on Tools and selecting Preview in the Memsource Editor menu bar. From here, users have the option to activate or deactivate the preview window. There is also the option of viewing either the source text (showing the original, unchanged text while translating) or the target text.

Using the In-context Preview While Translating

The in-context preview in the web browser might be affected by the fact that the Editor has only a portion of segments loaded at a given time. Skipping large portions of segments can lead to an incomplete preview.  Generally, scrolling through the translation table and thus loading segments from the beginning of a major section (e.g. a chapter) or ultimately from the beginning of the job, should improve the preview.

Currently, Memsource offers a beta version of a live in-context preview for InDesign files, however, the feature is still in development. The preview now supports all in-context preview functions (source and target preview, real-time changes, navigating from the translation table to the preview window and the other way round, and zoom) and it supports a wide range of InDesign components. More components will be added on a continuous basis in the future.

It is possible to Preview PDFs of your IDML files in Memsource Editor, but only with Frontlab Integration. This is not a live in-context preview, but thanks to this feature, users are able to generate a PDF-based preview of translated IDML or INDD files. In order to generate the preview, navigate to Document in your Memsource Editor, then Preview Translation.

While for all other formats this functionality will generate the preview file in its original format, if the document under translation is an IDML or INDD file, Memsource will generate and open a PDF preview.